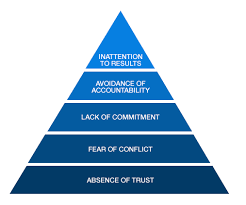 This post is not what you expect, I’m not gonna explain you the 5 dysfunctions of a team, you can actually know it by searching it in Google in 1 minute, what I’m going to do is going over my past experiences in order to identify each of the dysfunctions, how I experienced them and why it happened.

I can identify myself here mostly at the beginning of my career 7 to 8 years ago, a brand new programmer that hasn’t been in the real world, I started working in a consulting company, I remember I had to learn the basics of Oracle in just 1 week because I would go to work to a big corporation only 1 week after I joined the consulting company, you can imagine how I felt knowing that I would be joining a team where I was expected to be average in Oracle and some others languages.

The positive thing is that the big corporation knew that we were not that experienced as we were supposed to be, this is something I find out after when I was already working there.

I also have to say that this made me have to investigate a lot of solutions, trying things, failing, learning, failing, learning… so it was hard but every situation has something good you can extract right? I was so scared to fail, it was my first job and I wanted to do things well, the environment didn’t help either, being in a place where every week new people comes and other people leaves doesn’t help to be open to fail and learn, we all want to keep our jobs right?

I have to admit that my team was really good, not maybe with the processes and ways of doing things, now after many years and experience I can see it, but the people was good, they were good colleagues and they helped me when I needed, I did not want to show my weakness, I did not want to ask for help with the result of doing things that I could have done so much better.

I don’t want to put all the blame on the corporation, it was also my attitude but to be honest, a different environment more open to failures and learnings would have helped.

I can think in some situations where I can see myself in this dysfunction, like the absence of trust I think this can also happen at the beginning of your career or when you are starting a new job, if you don’t feel confident, integrated and really part of the team you might be afraid when going into conflicts.

Some years ago I moved to Barcelona in order to make my own Startup, we were 3 colleagues trying to build the best app to discover Barcelona. This is something dangerous, starting something with colleagues that you don’t know very good where there is money involved can be fun but can be also really dangerous.

They were my colleagues and because of that I didn’t want to go into conflicts, sometimes yes but I was always like “They are my colleagues, I don’t want to hurt our relationship” and this is bad! because I should have done the opposite, not going into conflicts had a big negative effect that now I can not fix, but at least I still have their friendship!

I’m gonna also refer to the experience in Barcelona, fear of conflict results in lack of commitment, but also what happened is that decisions changed very quickly, so we had lots of directions to go, goals were changing more often than they should, we were frustrated, we couldn’t see the things moving forward and we were inexperienced, I was letting them just go wherever they want, not wanting to get into discussions was a cause of why we did not feel committed to the same thing.

In this case I won’t refer to Barcelona because I felt very responsible for what I was doing there, even though I didn’t handle it well, of course, lack of commitment results in team members not making each other accountable, but I think where I have been with less accountability is when I have not been involved in any discussion about the project, any roadmap, any directions, opinions, brainstorming, when I was just someone executing work to do, programming without even knowing the goal of what I was doing, the meaning, well, the goal of course was to fix a bug, to build a feature but why, which business value behind, what are we trying to do with this thing?  are we going to make the users happier? are they currently happy with what we do and what we deliver? In my opinion, if you want to feel accountable you should get involved in what’s going on at other levels and not only limited it to your scope and of course, the place you work should provide you this environment.

That’s a good one if we don’t feel accountable for what we are doing, which is going to be our priority? we will put our ego, recognition, professional development ahead of the team, which in consequence will get hurt and the company will also suffer the consequences. 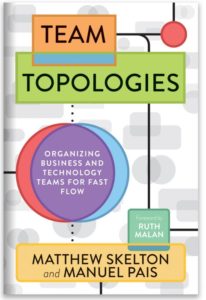